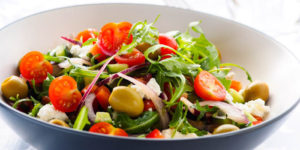 Greek salad is a popular and staple salad dish in the Greek cuisine which can be dated back to the 19th century due to the rising of tomatoes. The Greek salad is a well-known Greek dishes outside and inside Greece. In fact, the Greek salad has become a favorite around the world. One of the most popular dishes visitors ask for in Greece is a salad. Not only are they healthy and fresh, they are simply delicious.

While Greek salad is not the most traditional of Greek dishes, it has become widely eaten by tourists and natives alike.

The authentic Greek salad or what Greek call it as ‘Horiatiki’, which means village or peasant salad – basically a combination of tomatoes, onions, cucumbers, green peppers, olives and feta cheese, dressed in olive oil and sprinkled with oregano. Other common ingredients include bell peppers, berries, or capers, which are especially popular in the Dodecanese Islands. Read the ingredients again. Did you notice there is no lettuce in there? Unlike traditional Western Greek salads, there is no lettuce in an authentic Greek salad in Greece. And an authentic Greek salad will be different from Greek salads made in other countries. For example, “Greek salad” in America may contain lettuce with Greek-inspired ingredients. In Detroit, “Greek salad” often includes beets and in the Tampa Bay area, potato salad. In Cyprus, an island nearing Greece offers Cypriot salad. Which contains ingredients similar to a traditional Greek salad, but consists of finely chopped tomatoes, flat-leaf parsley, caper leaves and possibly a red wine vinegar.

Rules of the Greek Salad 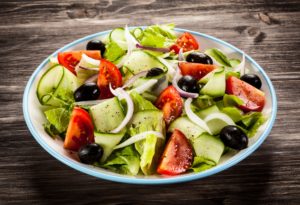 Tomato seeds have a history in Europe, most seen in Italian history. While tomato seeds brought back to Spain from South America by the Conquistadores during the exploration of the New World, they then spread to Italy, and Greece by 1818, when Greece was a part of the Ottoman Empire. At the time this fruit was viewed with suspicion and grown purely ornamentally. The first tomatoes to grow in Greece were on the island of Syros. Not long after, the petite waterless tomato was first grown in Santorini. To this day, these tomatoes are still thriving on Santorini’s rich volcanic soil. The first canning plant of tomatoes was opened in 1915 in Nauplion before tomatoes became a staple in Greek cuisine. Noticeably, the ingredients of a Greek salad resemble those that a Greek farmer would have on-hand. Because of this, it is often thought that Greek salad was a farmer’s breakfast or lunch, and grew in popularity from that origin.

While a typical Greek salad has lots of healthy ingredients (tomatoes, green pepper, cucumbers, and onions), the additions that give it bulk and personality (feta, olives, and olive oil) can add hundreds of extra calories.

Tomatoes are essential for a Greek Salad. Tomatoes contain a powerful antioxidant, lycopene, the red pigment found in many fruits and vegetable. The antioxidant in lycopene protects the liver from free radical damage. This allows the liver to function optimally, metabolizing and removing toxins from the body.

Onion, they might make you cry, but you will be laughing in the long run. Onion contains excellent source if vitamin C and B6, folate, iron, potassium, and manganese. Onion contains two phytochemicals: allium and allyl disulphide. Studies have shown that these properties fight cancer and diabetes. It can also reduce the stiffness of blood vessels and lower blood pressure levels.

Cucumber contains antioxidants that will help battle free radicals and helps the body flush out built- up toxins. Cucumber is also great for reducing bloating and uncomfortable water retention.

Leafy greens (modern with a twist)

Leafy greens are low in calories and carbohydrate but loaded with fiber. Eating leafy greens is a great way to increase the volume of your meal, without increasing the calories.

Olives are very high in vitamin E and other powerful antioxidants. Studies show that they are good for the heart, and may protect against osteoporosis and cancer. They consist of 75–80% water, 11–15% fat, 4–6% carbs and minor amounts of protein. Olives are very rich in antioxidants. They may reduce oxidative damage in the body and help fight infections caused by bacteria.

The problem with purchased olives is that one tiny olive contains a large amount of sodium, but not many people can stop with just one. One large, black olive contains 32 milligrams of sodium. When purchasing olives, look for low sodium option.

The good news for you cheese lovers is that feta is one of the healthiest cheese out there. Feta cheese is made from goat or sheep milk (or combined). It is easier to digest, much less allergenic and inflammatory than cheeses from cow’s milk, which is encouraging to those of you who may be sensitive to dairy products. Feta cheese supplies key vitamin and minerals like calcium, vitamin B12, D, iron, and folate. And it contains probiotics which are essential for a healthy gut.  However, feta cheese is high in saturated fat, cholesterol, and sodium, it should be eaten only as an occasional indulgence.  To decrease sodium content, you can soak feta in water for a few minutes prior to use.

When purchasing olive oil, look for extra virgin olive oil. The reason is being that extra virgin has a distinctive taste and is high in phenolic antioxidants, the main reason why olive oil is so beneficial. Extra virgin olive oil is one of the healthiest fat and it can help lower the total cholesterol or bad cholesterol. It contains modest amounts of Vitamins E and K and plenty of beneficial fatty acids.  When pouring olive oil onto your salad, do it moderately. It is possible to get too much of a good thing.  Keep in mind that olive oil is high in calories, and high in fat (too much of any kind of fat is still bad for you).

Irene. “Greek Cuisine and the 19th Century Invasion of the Tomato.” EF Tours Travel Blog The