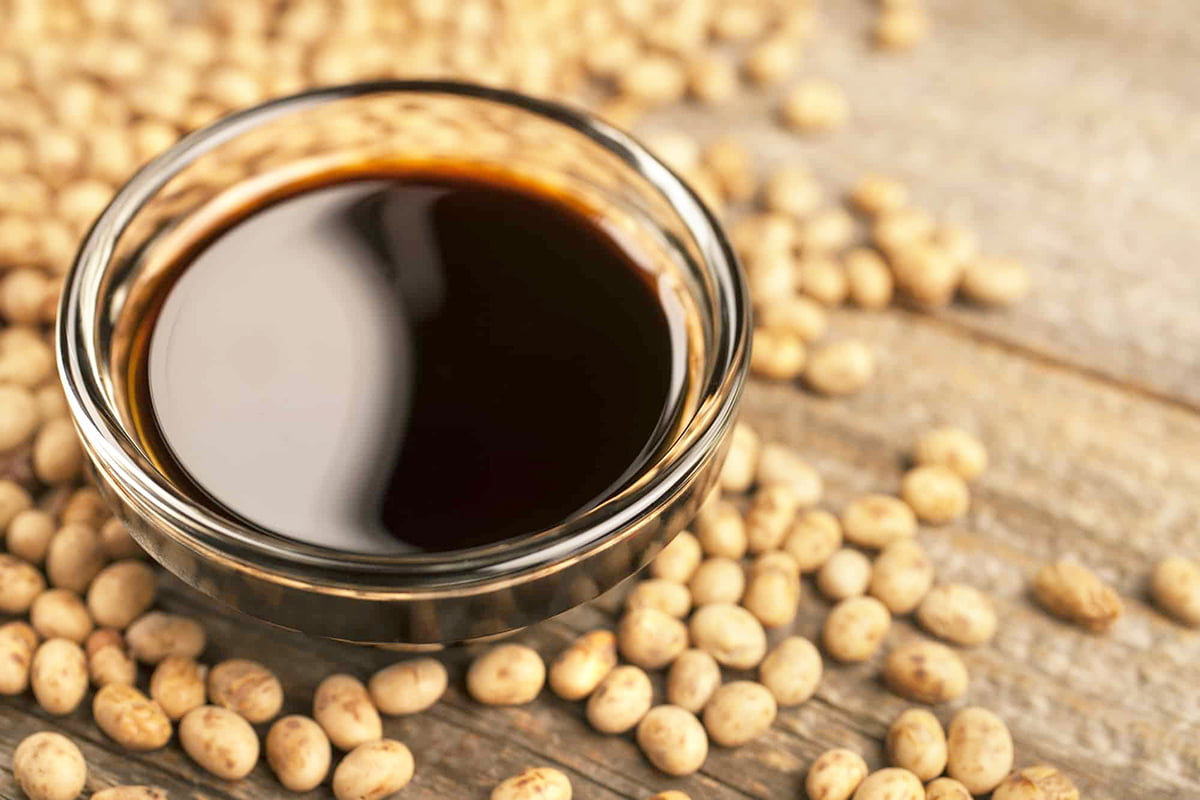 Soy sauce has been used in Asian cooking for over a millennium and can now be found in most household pantries. But could your favorite dipping sauce be bad for your health?

In this guide to healthy soy sauce, we’ll break down everything you need to know about the popular ingredient, including how it’s made and its potential health effects. Plus, we’ll highlight a few of the best soy sauce and gluten-free soy sauce alternatives to add to your cooking routine. From traditional Chinese soy sauce to kelp-based vegan stand-ins, these delicious condiments will satisfy all your stir-frying, sushi rolling, marinading, and dumpling dunking needs.

Table of Contents
What is Soy Sauce?
How Is Soy Sauce Made?
Types Of Soy Sauce
The Best Soy Sauce and Soy Sauce Alternatives to Add to Your Pantry
Soy Sauces FAQ

What is Soy Sauce?

As the name suggests, soy sauce is a flavorful liquid condiment made from fermented soybeans, wheat, water, and salt. It’s a common ingredient in Asian cooking, making it one of the most popular soy products worldwide. The condiment is typically bottled but also comes in small plastic packets at takeaway restaurants.

Soy sauce is best known for its delicious umami taste and deep brown color. The thin, dark-colored liquid has a salty, savory flavor that compliments rice, noodles, sushi, sashimi, and other Asian dishes.

Because wheat is used in the fermentation process, conventional soy sauce is not gluten-free. Those with gluten sensitivities should look for soy sauce products labeled gluten-free or wheat-free. The most popular soy sauce alternatives are Japanese tamari and coconut aminos. While they don’t provide an identical flavor, they’re the closest alternative to the real thing.

How Is Soy Sauce Made?

The vast number of soy sauces available today comes in various colors and flavors, and from dark to light, thanks to different production methods and regional variations. While authentic varieties stick to the original combination of simple ingredients, lower-quality soy sauces often contain artificial flavoring and caramel color.

To make traditional soy sauce, soybeans are first soaked in water. Then, the drained beans are mixed with wheat flour and a culturing mold before being left to ferment for a few days. Once the mixture has developed, water and salt are added. This mixture is then placed in a fermenting tank, where it will age for upwards of five to eight months. Once the fermentation process is complete, the mixture is mashed, drained, pasteurized, and bottled.

To reduce costs and speed up the production process, lower-quality soy sauces often rely on chemical processes and production, where the soybeans are heated and mixed with wheat and hydrochloric acid to break down the proteins quickly. Because the resulting soy sauces don’t have the same flavor or aroma, companies often add artificial coloring, flavors, and extra salt to compensate.

High-quality soy sauce will be labeled as “naturally brewed,” meaning that only natural fermentation was used. The ingredient list will show “hydrolyzed soy protein” or “hydrolyzed vegetable protein” if chemical production methods were used. 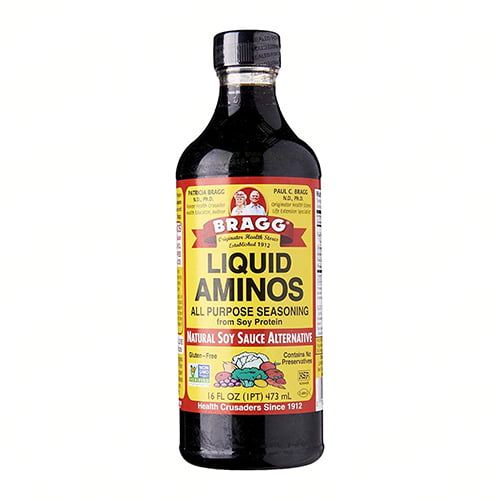 Coconut aminos is dark in color and have that salty and umami flavor with a mild sweetness. At the same time, it contains far less sodium. If you are looking for sweet soy sauce, coconut aminos is the perfect alternative. 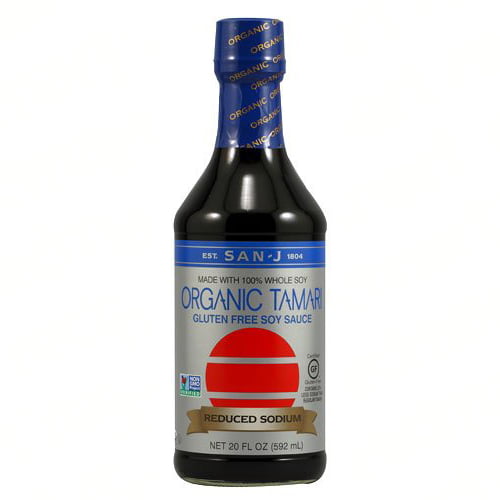 San-J’s Reduced Sodium Tamari Sauce is perfect for home cooks looking for a healthy alternative to conventional soy sauce. Unlike coconut aminos, tamari is still made from fermented soybeans for an authentic taste— minus the wheat, gluten, and high sodium levels. While the average soy sauce contains upwards of 900 mg of sodium per serving, San-J’s Reduced Sodium Tamari contains just 710 mg. 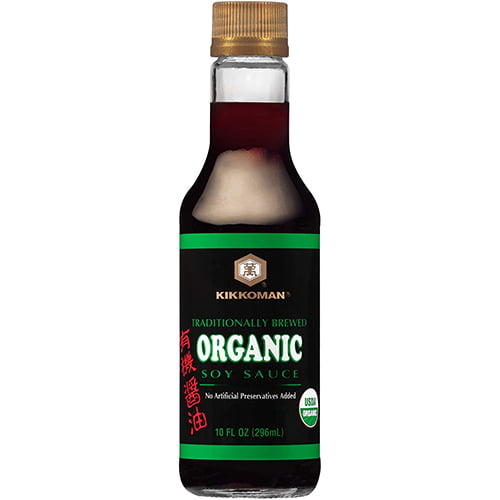 Kikkoman is one of the most well-known soy sauce brands on the market, making their Organic Naturally Brewed Soy Sauce hard to beat. The traditional recipe sticks to simple ingredients and time-tested methods to their delicious sauce. You’ll have peace of mind while cooking knowing it’s naturally fermented without preservatives or chemical additives. Plus, it’s USDA-certified organic and made using GMO-free soybeans, wheat, and salt. 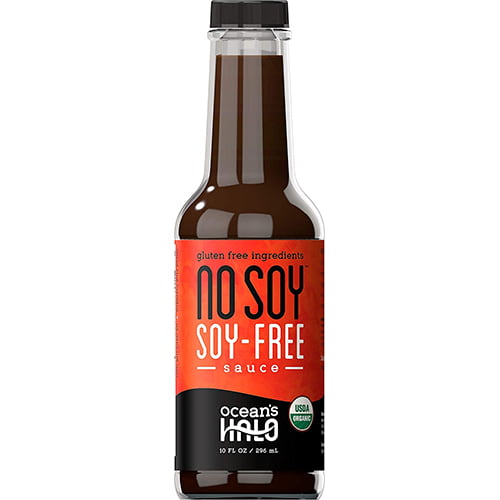 Looking for a soy sauce alternative that’s both soy-free and gluten-free? Look no further than this all-purpose sauce from Ocean’s Halo. The all-purpose sauce makes the perfect replacement for conventional soy sauce in dips, marinades, stir-fry, and Asian recipes. It gets its umami flavor from a unique combination of apple cider vinegar, kelp, mushrooms, molasses, and citrus. The best part is, it’s gluten-free, vegan, soy-free, MSG-free, and USDA-certified organic.

Most generic soy sauce contains GMOs and chemical carcinogens, but not 365 by Whole Foods Market’s Shoyu Sauce. The in-house brand focuses on offering high-quality products made with organic ingredients at a price point anyone can afford! Their Shoyu Sauce is organic, vegan, keto-friendly, and (most importantly) delicious! The best part is, it’s incredibly affordable!

Shoyu is a type of Japanese soy sauce. It is a thin, full-bodied flavor with a subtle sweetness. This type of sauce can be used as an all-purpose cooking soy sauce.

If you’re looking for a more complex umami flavor, try Ponzu sauce instead! The delicious Asian sauce blends shoyu soy sauce and rice vinegar with citrus juices to create a unique taste that’s salty, sweet, sour, tangy, and savory all in one. Traditionally, ponzu sauce is used as a dipping sauce, marinade, salad dressing, and adding a finishing touch to stir fry dishes.

Money saving tip: Some of these soy sauce is available at Thrive Market.

Why you should pick organic soy sauce:

Additionally, soy is one of the most common allergens, especially among children, where rates have increased substantially over the past two decades. Food scientists have recently begun to find evidence of a correlation between the prevalence of GMO foods and the increase in children with food allergies.

To find the best soy sauces, it’s best to stick to high-quality, organic, naturally-brewed products from reputable companies. If you’re worried about the potential adverse health effects of soy sauce, use a soy sauce alternative like tamari or liquid coconut aminos instead.

Is soy sauce bad for you?

As you just learned, not all soy sauce is created equal. While naturally brewed organic soy sauce has been shown to be beneficial for your health, steer clear from cheap, chemically-produced products with low-quality ingredients and artificial additives. These low-end soy sauces are often made using GMO soy and may contain carcinogens. Not to mention, they can also be loaded with sodium. If you are watching your sodium intake, low sodium options are available.

Though naturally-brewed soy sauce gets a bad reputation for its high sodium content, it contains high levels of antioxidants that may support heart health. A study by the National University of Singapore reported that dark soy sauce has ten times the antioxidant activity of red wine.

A 2001 study by the United Kingdom Food Standards Agency found that over 22% of tested samples of chemically-produced soy sauce contain a carcinogen called ethyl carbamate, which has been linked to multiple types of cancer. As long as you stick to naturally-brewed organic products, soy sauce can be part of a healthy diet.