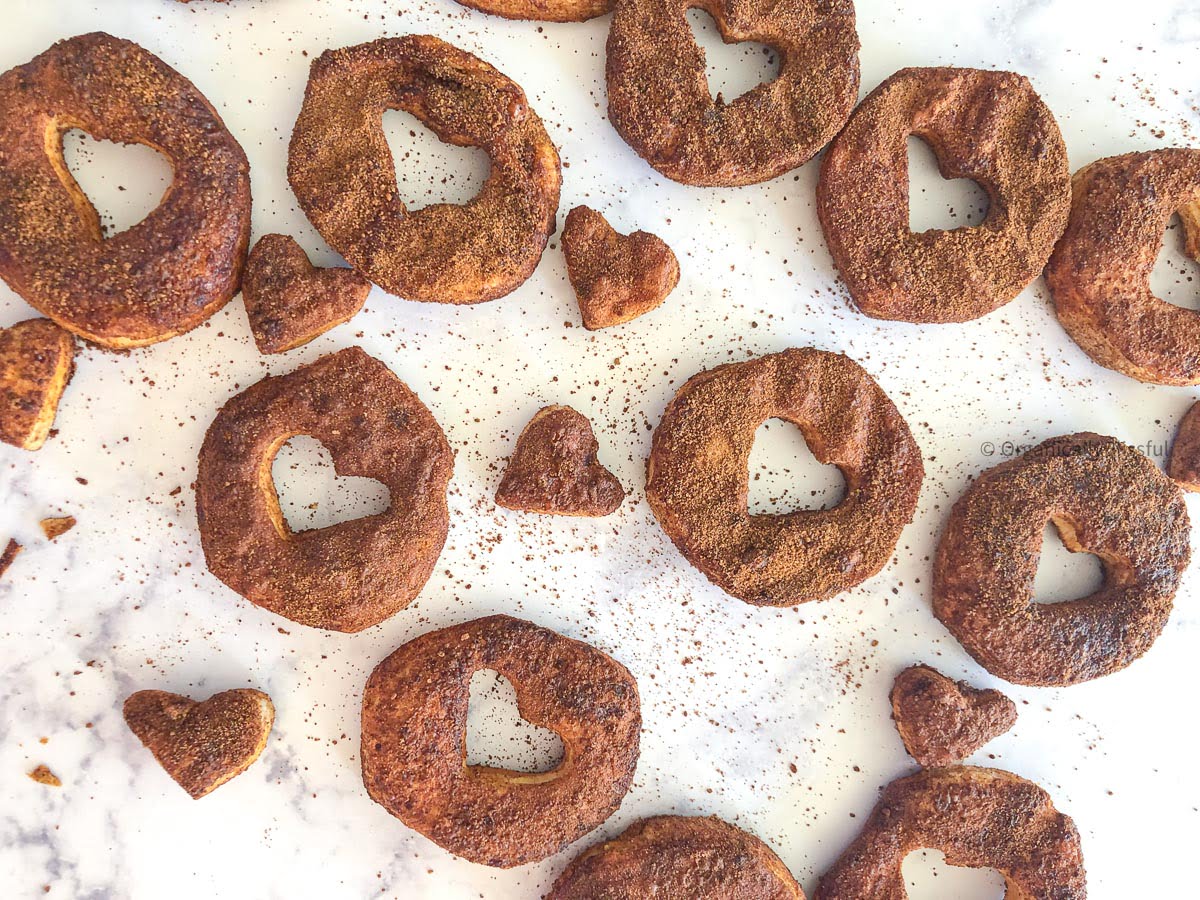 This easy and delicious air fryer cronuts recipe is going to be your new go-to dessert. With the help of canned biscuits or crescent rolls dough, you can have buttery and flaky, crispy on the outside and airy on the inside cronuts that are ready to be served.

Dessert recipes are typically complicated and can be daunting if you are not a good baker. With my recipe, you are guaranteed to have a delicious dessert to serve your family or a crowd. And not to mention, this recipe is much healthier than store-bought donuts or cronuts, yet hit the spot and save you hours.

What is a Cronut?

If you have never had a cronut before, it is a cross between a donut and a croissant. Some people refer to them as croissant donuts or cronut for short. They are usually flaky and buttery like a croissant. At the same time, they have an airy and soft texture like a donut.

Cronut was first invented in New York City in 2013 by a French American pastry chef Dominique Ansel. People were lined up to get this cronut from his New York bakery when the word got out.

Typically, cronuts are made with croissant-doughnut pastry or puff pastry sheets with croissant-like dough and deep-fried in grapeseed oil, canola oil, or vegetable oil. Some are even filled with flavored cream. 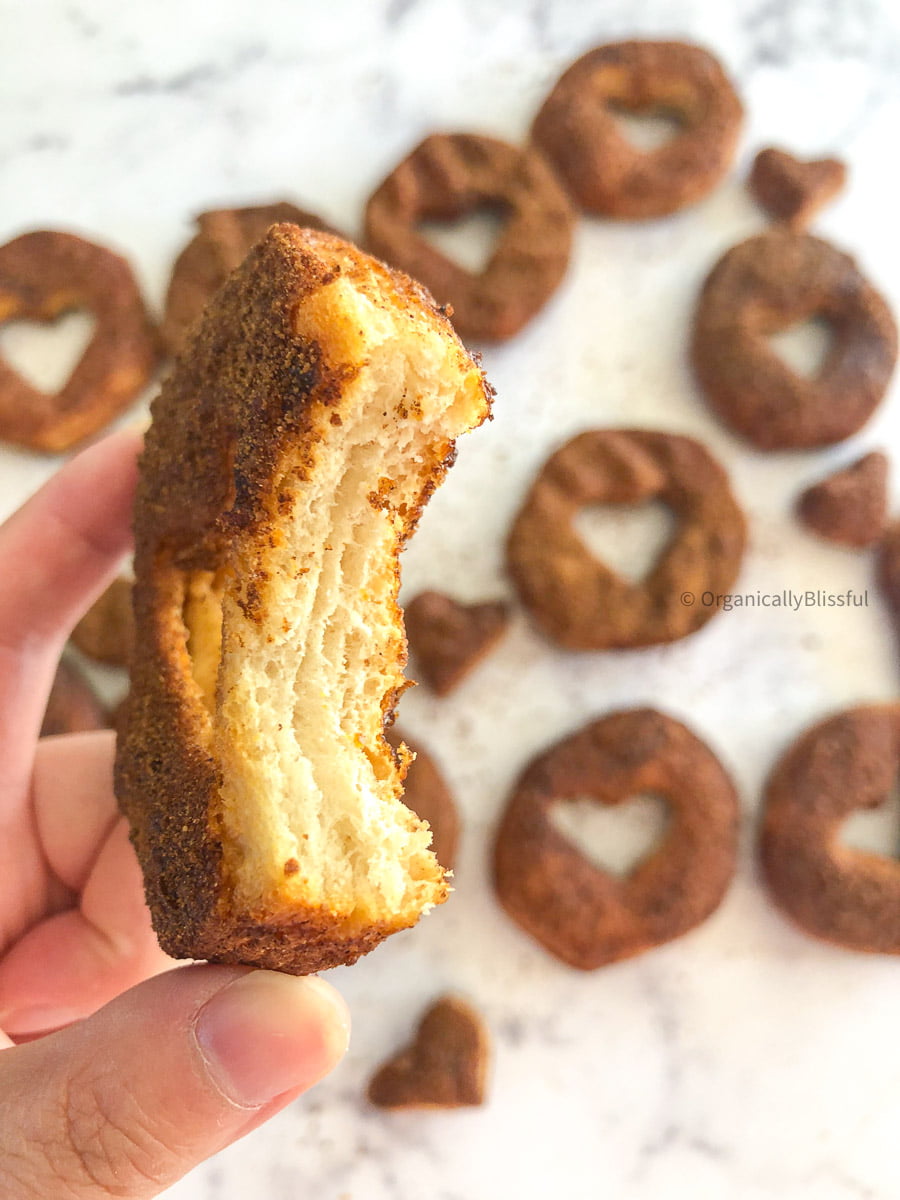 What You Will Need To Make These Air Fryer Cronuts

Cronuts are typically made with croissant-doughnut pastry dough. Some bakers make them with puff pastry sheets, crescent pastry dough, or croissant dough. You can make the dough from scratch, or you can purchase ready to use.

If you need a canned biscuit suggestion, I used Immaculate Baking Organic Flaky Biscuits for this recipe. I like using this brand because it is organic certified and made with real ingredients. It contains no bleached flour, artificial flavor, or preservatives. Not to mention, it is also vegan-friendly! This means it doesn't have any unsalted butter, eggs, or animal by-products like many pastry doughs. And these biscuits are truly soft and buttery.

Just like donuts, you can glaze it however you want. For this recipe, I made cinnamon sugar cronuts. To make cinnamon sugar, I used coconut sugar and ground cinnamon. You can use other types of sugar like brown sugar or maple sugar.

To cut donut shapes, you will need to use a small cookie cutter (1 inch round cookie cutter) to create "donut holes." And depending on the size of dough you are working with, you may also need a bigger cutter to cut the donut shape.

Since I used canned biscuits, I didn't need a bigger cookie cutter. And since I didn't have small round cookie cutters at home, I used a heart shape to cut the middle part.

How is this cronut recipe healthier

Desserts are usually packed in calories, and cronuts are no exception. A cronut can arrange anywhere between a few hundred to even over a thousand calories! Isn't that insane?! After all, they are half of a croissant, which is packed in butter!

To make a healthier version of the cronut, I used canned biscuits. While you can use crescent sheets of puff pastry dough, biscuits are typically healthier as they don't contain as much butter.

The canned biscuits I used make eight biscuits, and each biscuit is 170 calories. To create the perfect size cronut, I split each biscuit in half. So this means each cronut is only 85 calories! With the addition of sugar and cinnamon, you are looking at enjoying a cronut that is about 130 calories! By saving hundreds of calories, you can enjoy a warm cronut with a scoop of vanilla ice cream—all without guilt.

Another reason why cronuts are packed in calories is that they are deep-fried! This means they are drenched in oil and rack up the calories. With this recipe, instead of deep-frying, I used air frying. You will still get that crispy on the outside effect but without drenching it in oil.

1. The canned biscuit I used contains eight full-size biscuits. To make these cronuts, I split each biscuit into halves. So this means you will end up with 16 thinner biscuits. Then use your cookie cutter and cut the middle. 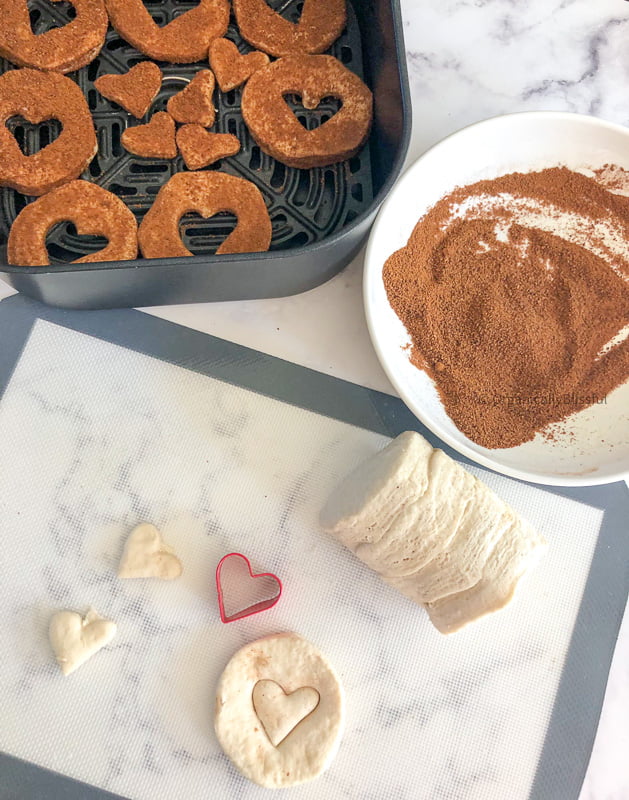 2. In a mixing bowl, mix the sugar and cinnamon together.

3. Toss the biscuits into the bowl and toss, including the middle part. Don't waste all that delicious dough when you can turn the middle parts into bite-size cronuts. If it's not sticking, you can add some mixtures on top and gently pad it. Then flip over and repeat. Gently padding it with the mix on top will ensure your cronuts take on as much cinnamon sugar as possible. 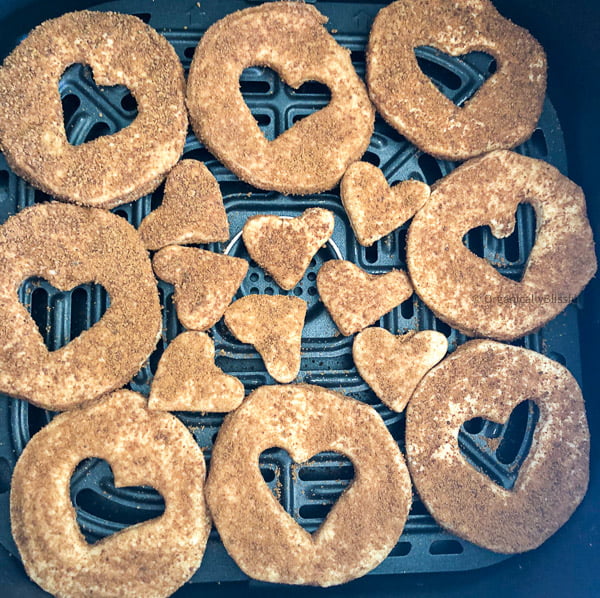 5. Once your cronuts are dusted with cinnamon sugar, place them in the tray. Make sure they don't touch each other, or else they stick together during air frying. Repeat until you fill up your basket. Depending on the size of your air fryer, you may need to air fry all of them in two sessions.

6. Air fry the cronuts on 350F for 7-8 minutes. Flip them over in 4 minutes. Keep your eyes on the cronuts as they should become golden brown. 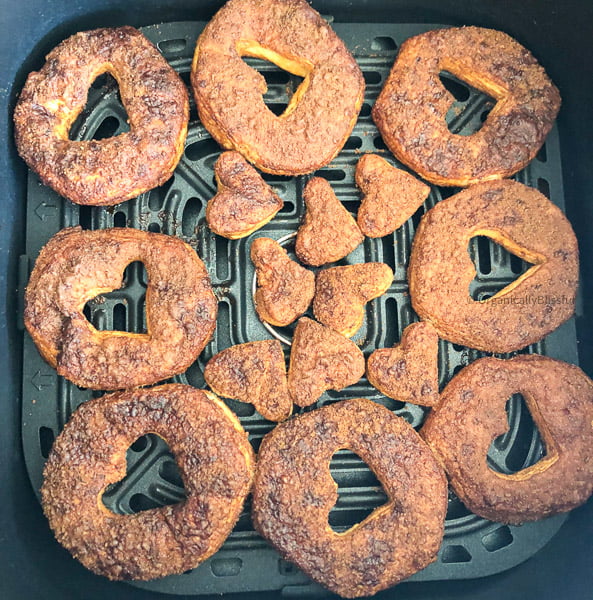 Baking: You can bake this cronut in a sheet pan instead of air frying. It will take longer to make, and you may not achieve the crispy texture that air frying can achieve.

Egg wash: To get cinnamon sugar to stick better, you can wash each cronut with a beaten egg. If you do decide to make an egg wash, this cronut will no longer be vegan-friendly. 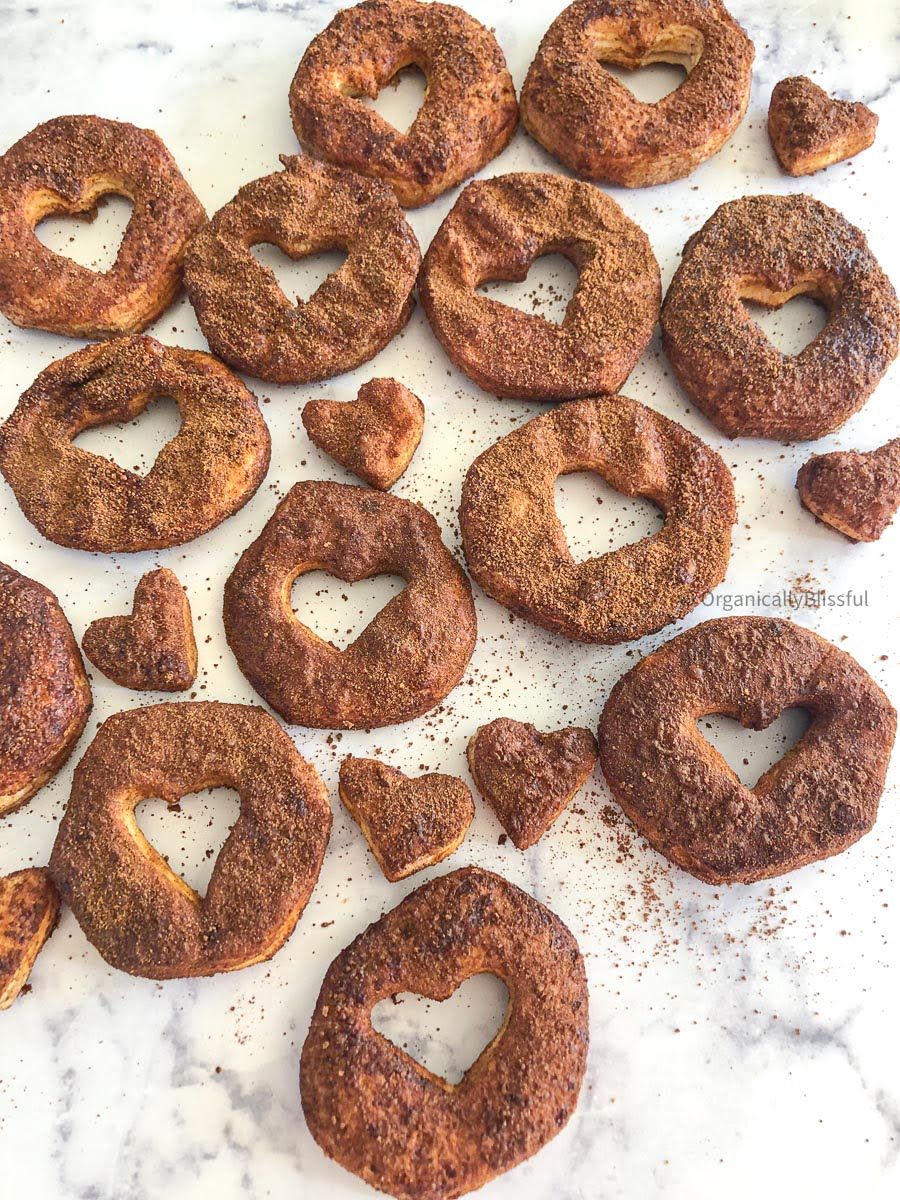 How to make cronuts with crescent rolls

To make a cronut with crescent rolls, you need to unfold a crescent dough square or rectangle. Make sure the perforation is sealed and stack two rectangles on top of each other. Then fold in half widthwise. To cut into a donut shape, use a 3-inch biscuit cutter and a 1 inch round cutter. You can then coat it with cinnamon sugar and place it in an air fryer basket.

How to Store Cronuts?

Leftovers can be stored in an airtight container or plastic wrap at room temperature for 1-2 days. Or you can place them somewhere like an unheated oven. Do not place them in the refrigerator, as the humidity can make them soggy. If your cronuts contain a custard filling, store them in the fridge.