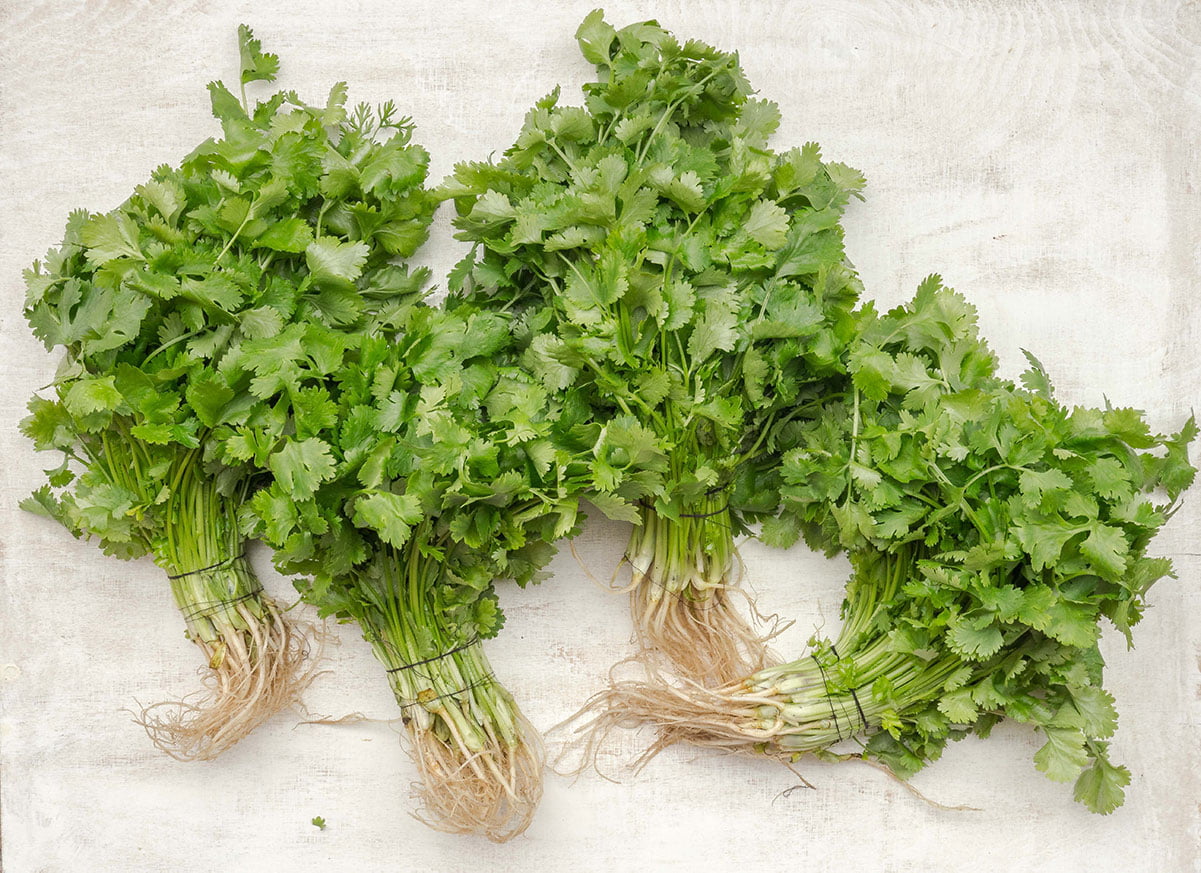 Love it or hate it, cilantro is one of the most popular fresh herbs in the kitchen. But because of its unique grassy flavor and citrusy aroma, fresh cilantro can be one of the more complex herbs to substitute. Instead of simply swapping herb for herb, you may need to use two herbs or add a squeeze of acid to recreate its robust flavor.

So to help you find the best cilantro substitute, we're breaking down everything you need to know about the leafy green herb— including the reason why you may hate cilantro.

Cilantro refers to the leaves and stems of the coriander plant, more formally known as Coriandrum sativum. As its long-stemmed, flat-leafed appearance would suggest, the versatile herb is a member of the parsley and carrot family, and it's often referred to as Chinese parsley, Mexican parsley, or fresh coriander leaves.

Cilantro has a pungent aroma and bright flavor that adds just the right amount of zing to everything from pico de gallo to steak marinade. However, while the fresh herb contains citrus and pepper notes, these bold flavors quickly fade when cooked or dried.

Fresh cilantro is usually sold by the bunch in the produce section of most grocery stores. Because its leafy appearance can be easily confused with parsley, you should always do a quick double-check before tossing it in your cart.

Thanks to its unique taste, fresh cilantro is a signature ingredient in numerous cuisines across the globe. It's frequently used in Mexican cooking in flavorful salsa, guacamole, and cilantro lime rice and is often sprinkled on top of tacos, enchiladas, carnitas, and other Mexican dishes as a garnish. Cilantro is also used in Caribbean, North African, Mediterranean, Eastern European, and South Asian cuisine.

Is coriander the same as cilantro?

Because the two herbs come from the same plant, home cooks can easily confuse coriander with cilantro. In the United States, cilantro refers to the plant's leaves and stem, while coriander refers to its dried or ground seeds.

Though it's easy to assume that coriander makes the best substitute for cilantro, that's not quite the case. Ground coriander seeds have their own distinct flavor and aroma, so they won't work as a cilantro substitute in most recipes.

Why do I hate cilantro?

But perhaps the most interesting thing about cilantro is that it tastes different to different people, all thanks to a specific gene: OR6A2, a receptor gene that codes messages from aldehyde chemicals. Scientists at Cornell University discovered that individuals with this unique genetic trait think cilantro tastes like soap— which, interestingly enough, often contains aldehyde chemicals.

If you aren't exactly a fan of the taste, try crushing the fresh cilantro leaves before adding them to your guacamole or salsa or using them to garnish your dish. A Japanese study found that crushing the leaves releases an enzyme that helps to reduce aldehyde levels for a milder, less soapy flavor.

The Good News: You can actually train yourself to go from cilantro hater to lover

For many people who hate cilantro, it is usually due to the way their brain is programmed. For example, if a new and unfamiliar flavor/scent doesn't fit what we have experienced already, we are more likely to categorize the new experience as "unpleasant."

Here Are The Best Substitutes for Cilantro And Coriander

Whether you're substituting cilantro because you hate the soapy taste or simply because you ran out of your favorite herby ingredient, these other herbs make excellent substitutions.

While no fresh herb can add quite the same zing as cilantro, Thai basil can come pretty close. The purple-stemmed leafy herb is a close relative of the Italian sweet basil that you're probably familiar with seeing spread on your pesto pasta or sprinkled on top of your pizza and is a staple in Southeast Asian cooking. Its tantalizing anise and licorice notes make it an ideal replacement for cilantro in pesto, curries, stir-fries, and dishes with a bit of spice.

Parsley and Lemon or Lime Juice

Because parsley and cilantro are closely related, fresh parsley makes a good cilantro substitute. The zippy of fresh parsley helps bring out the freshness of other ingredients in the dish— especially when paired with a squeeze of lemon or lime juice that helps to mimic the somewhat citrusy flavor of cilantro.

Additionally, thanks to its similar appearance, Italian parsley makes a good substitute for cilantro in recipes that call for the herb as a garnish. Making this the best substitute garnish on top of a soup or stew.

Cumin is often used alongside coriander in Asian, Latin American, and Middle Eastern cooking. While the slightly nutty, spicy flavor doesn't taste like fresh cilantro, it adds depth to seasonings and dressings that call for dried cilantro or ground coriander seeds.

Caraway seeds and coriander seeds have similar flavor profiles and are often used interchangeably. Carraway is a tad bit sweeter, making it an excellent choice for marinades and rubs for grilling and roasting.

As strange as it sounds, fresh mint and a splash of balsamic vinegar or citrus juice can be used as a cilantro stand-in.

Another possible substitution for cilantro is to combine a number of different herbs that bring their own unique depth and interesting flavor notes to the recipe. Try starting with a blend of herbs like fresh Italian parsley, basil, dill, tarragon, and oregano, and adjust your ratio as your taste buds see fit.

If you or one of your dinner guests are someone who really hates cilantro, you may want to leave it out of the dish entirely. Most dishes will still taste delicious without it.