What Do Leeks Taste Like + What To Do With Them 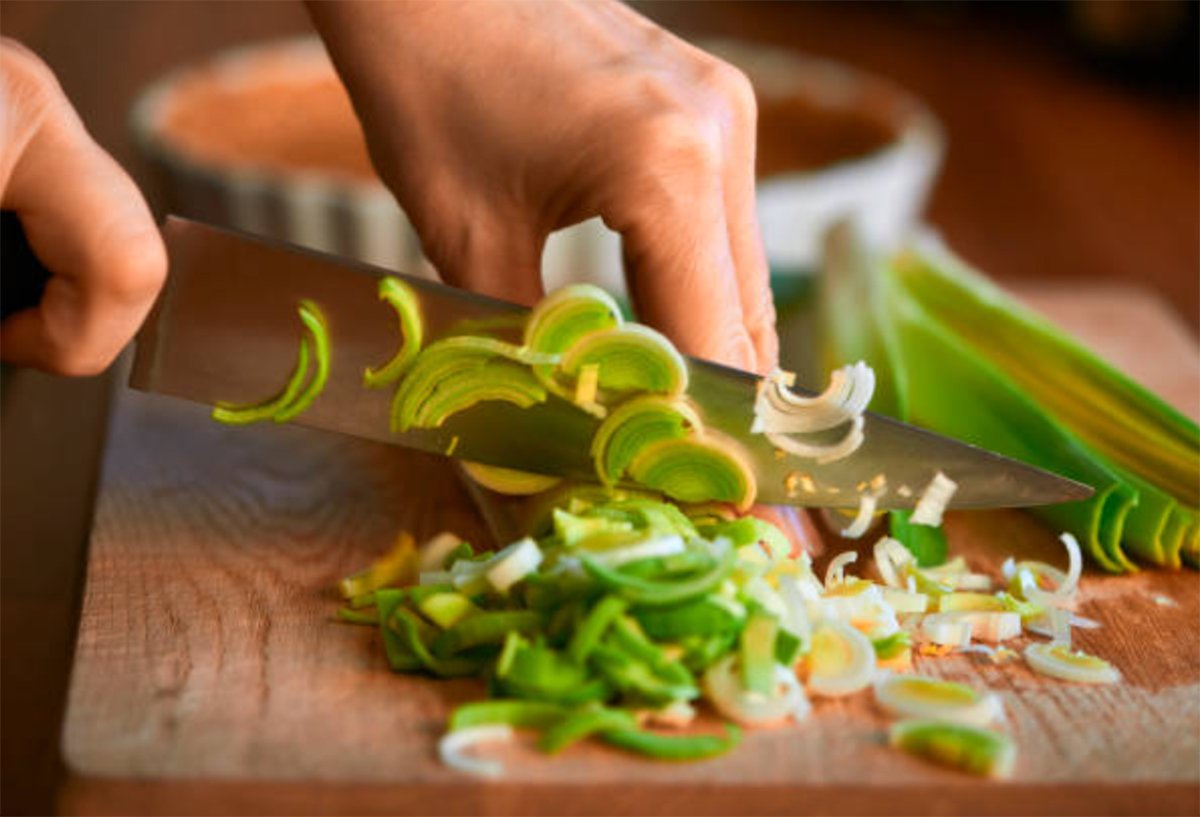 Perhaps you see "leek" in a recipe and just shrug your shoulders and chop up green onion instead. Put that knife down! Leeks may belong to the onion family, but their distinct flavor warrants treating them as their own vegetable and making them hard to be traded out.

Leeks are one of many onion family members, including scallions, garlic, shallots, and chives. Their flat leaves are much wider and thicker than onions and aren't separate from the bulb. Instead, just as an onion has layers within the bulb, a leek's dark green leaves are also layered. Each layer gets thinner as you go towards the middle.

Leeks taste considerably sweeter than green onions. It taste somewhat earthy and grassy with an herbal pinch. Larger leeks have a stronger flavor than smaller leeks.

You can absolutely eat leeks raw, such as in salads on atop sandwiches. Most people choose to cook them, however. Cooked leeks become creamy and buttery, taking on the flavors of the foods cooked with them. Roasted leeks will still melt in your mouth but will crisp up.

Can I Eat The Whole Leek?

You can, but we wouldn't recommend it. The white and light green parts of the leek are the best. As the head up the stalk turns into the darker green leaves, the flavor will become more bitter. That part is also more fibrous and will need to be cooked longer to become tender.

Why Eat Leeks In The First Place?

Leeks don't only taste delicious, but they have many health benefits. They are low in calories and rich in vitamin C, K, A, and B6, and Leeks are a good source of calcium, iron, and magnesium. This means that leeks can reduce the risk of stomach, colon, and prostate cancers and reduce the risk of osteoporosis and eye degeneration.

How To Shop For Leeks

There is a noticeable flavor difference between the mild, small leeks and the strong, large leeks. Your recipe and personal taste preferences can help guide your decision. Look for leeks with large white and light green sections, and make sure they have roots on the bottom! While the roots aren't eaten, they help to keep the leeks fresh longer. Stay away from leeks that consist mostly of dark green tops, have had the roots chopped off, or have leaves that are starting to turn yellow at the tips. Firm leeks will give you a crisp texture.

How To Store Leeks

So you've home with your fresh leeks, but you have a few days before you plan to use them. How do you keep your leeks as fresh as possible for as long as possible? Shake off the leeks to get as much dirt out of the layers as possible. Rinse it well, wrap a damp paper towel around it, and then pop them into a perforated plastic bag. In the fridge, leeks can last up to 10 days, although bigger leeks will go bad sooner than smaller ones. If you start to see yellowing, trip off the affected leaves to keep the remainder of the leek fresh.

How To Freeze Leeks

Another way to store leeks long-term is to freeze them. Leeks are slightly unusual in that they are in season during the spring and fall instead of the summer. You can save yourself some room in your budget by buying leeks in season and then freezing them for the summer.

How To Clean Leeks

One understandable deterrent for people using leeks is that it takes some time to prepare leeks. Because the bulb is not sealed from the leaves, dirt, and dust often gets in between every layer. You can't rinse off the outside of the leek and consider it good, or you'll find yourself with a very gritty soup.

To clean leeks, you must first cut leeks. There are various ways to go about that, depending on what your particular recipe asks for. First, you'll cut off the roots and the dark green parts, leaving yourself the usable middle section. Then:

After slicing, fill a bowl with cold water and dump your chopped leeks in. Give them a swirl to rinse off the dirt. You'll find that the cut leeks will float, and the dirt will sink, making it easy to skim your clean leeks off the top and set them on a towel to dry.

How To Cook Leeks

Leeks can be used in nearly any recipe that green onions can, and there are many cooking methods to cook leeks. Perhaps the most famous leek recipe is potato leek soup. Leeks also lend a lovely mild onion flavor to quiches. Add some sautéed leeks and add them to mashed potatoes. Include thick slices of leeks in a pan of roasted vegetables. Skip the cooking altogether and add raw leeks to a salad or sandwich.

One best way to enjoy leek's flavor is to saute or stir fry it with oil, as the oil will seal the flavor in. Saute the leeks with olive oil with other vegetables and turn into a stir fry dish.

Grill leeks make a perfect side dish for your BBQ dishes. Slice them in half lengthwise and grill on medium-high heat until they are well charred.

Chop them lengthwise and toss in olive oil with salt and pepper. Bake at 425 for about 20 minutes or so until they are tender.

If you don't have leeks on hand, there are a few substitutes you can use:

Thinly sliced shallots are the best substitute, and their flavor is closer to a leek than white or yellow onion.

Sweet onions are another great substitute. However, they are much stronger than leeks, so you won't need to use them much.

Green onion or scallion looks like a smaller version of leek. This means you will need to use more to equal a leek.