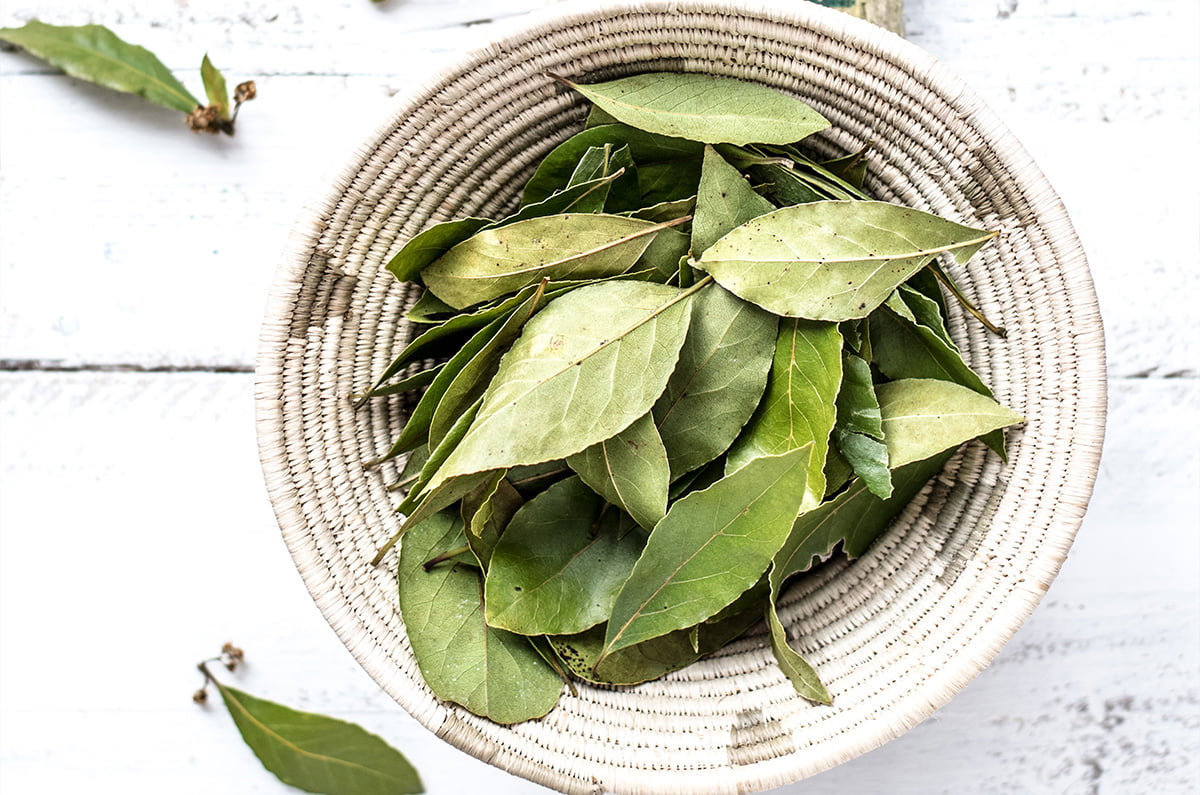 There's no bigger buzzkill in the kitchen than realizing you're all out of a key ingredient needed to successfully flavor your dish. While every herb has its own distinct taste and aroma, herbs and spices from similar families can be used to create a similar result.

Whether you've run out of bay leaves or you're simply looking to switch things up in your favorite recipe, these five herbs make great substitutes for bay leaves. Below, we'll break down everything you need to know about bay leaves, their substitutes, and the proportions to use when making the swap.

What are Bay Leaves, and How are They Used?

Bay leaves are a fragrant herb used to flavor soups, sauces, stews, curries, and other slow-cooked dishes. They're one of the most commonly used herbs around the globe and can be found in everything from French to Indian to Thai to Mediterranean cuisines. Because of their thick, leathery texture and pointed tips, the leaves are usually added whole and removed before the dish is served.

The aromatic herb comes from the bay laurel tree, an evergreen shrub that grows well in warm climates. There are two popular varieties of laurel leaves used in cooking: the Mediterranean/ Turkish bay leaves and California bay leaves. The bay leaves you'll find in the supermarket are likely the Mediterranean variety, which has a more subtle flavor than its California, West Indian, and Indonesian counterparts.

As a member of the bay laurel family, bay leaves boast flavor notes of mint, pepper, and pine. They're complex, aromatic, and incredibly versatile. When cooking with bay leaves, it's crucial to add them early in the cooking process to allow their flavor to infuse into the dish fully. As the leaves break down, they'll begin to release a tea-like aroma with hints of menthol, eucalyptus, and thyme.

The herb's slight bitterness and earthiness help to bring out the flavors of other ingredients in the recipe without overpowering them. Thanks to their mild flavor, bay leaves are used to bring depth and balance to recipes with a long cooking time, such as pasta sauces, stews, broths, meat dishes, and curries.

As with all herbs, there is a slight difference between fresh and dried bay leaf. To avoid overpowering the dish, it's crucial to use the type of bay leaf specified in the recipe. As a rule of thumb, two dried bay leaves are the equivalent of a single fresh leaf.

Dried bay leaves lose a bit of flavor and strength during the dehydration process, adding subtle flavor to the background of dishes instead of being front and center. Fresh bay leaves have a lighter flavor with a fresher, more floral taste. While fresh bay leaf and dried can be substituted for each other, you'll likely need to adjust the amount used.

Thyme is incredibly common, thanks to its versatility. Thyme brings the same mild, minty, earthy taste to the dish. The handy substitute can instantly boost the flavors of a vegetable dish, pasta sauce, or soup.

When using thyme as a bay leaf substitute, use 1/4 teaspoon of dried thyme per bay leaf. While you can use fresh thyme if you have it on hand, the dried thyme in your kitchen cabinet will do just fine.

Oregano is another common herb most chefs always have on hand in their pantry. It features a similar peppery, minty flavor that makes a great alternative to bay leaves in sauces, marinades, salads, and vinaigrettes.

While oregano brings the same earthy spice to your food, it has a stronger, sharper flavor. When using oregano as a substitute for bay leaf, you'll only need 1/4 teaspoon of oregano per bay leaf.

Like most bay leaf alternatives, basil is a member of the mint family. It has a milder profile than a bay leaf but still features mint, pepper, and earthiness notes. Basil is incredibly common in Italian, Mediterranean, Thai, and Southeast Asian cuisines.

When using basil as a bay leaf substitute, you'll want to add it towards the end of the cooking time to preserve its distinct taste. Basil added to a stew, soup, or sauce too early can lose its flavoring and get lost in the recipe. Try sprinkling fresh basil on top of your soups and pasta recipes right before serving.

While juniper berries aren't as common as other substitutions, they offer similar piney, earthy notes that make them a great bay leaf substitute. The dark, aromatic berries are often used to compliment meat like duck, chicken, pork, beef, venison, and other wild game.

The flavor of juniper berries resembles the flavor of pine needles, so it's crucial to start with a small amount and slowly add more to prevent an overpowering pine flavor.

Boldo leaves are another substitute that adds a strong flavor to recipes. Native to South America, they're best known for their use in traditional medicine and yerba mate teas. The flavorful leaf offers numerous antioxidants and health benefits, such as aiding weight loss and supporting healthy digestion.

Boldo leaves are bitter, peppery, and a little bit spicy. Because of their intense flavor, you'll only need to use half the amount of boldo leaves as you would bay leaves. Substitute 1/4 tsp for every two bay leaves.