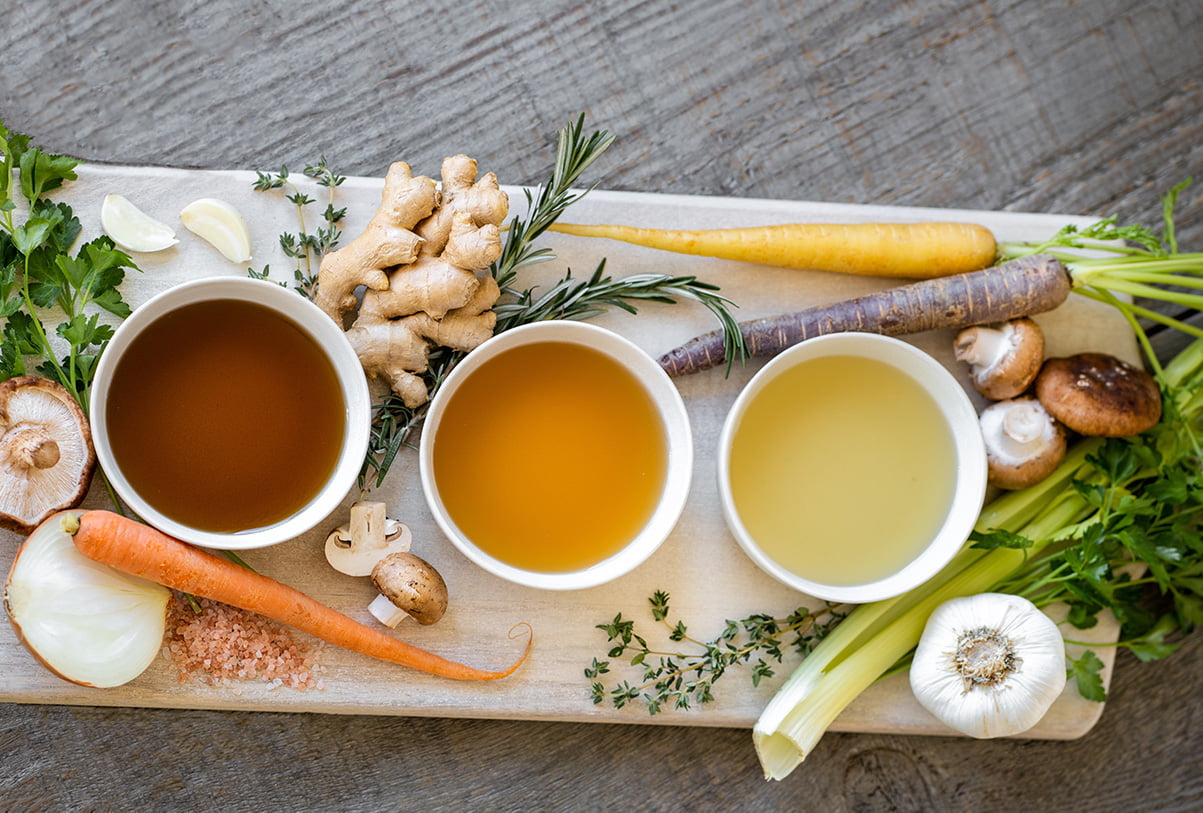 Chicken broth is the base ingredient of many soup, stew, sauce, and casserole recipes. From slow-cooking meals in a roasting pan to Instant Pot meals, the chicken broth adds more flavor to your favorite recipes.

If you haven't already figured out, the chicken broth should be a pantry staple that you should always have at home. However, if you run out or simply do not have any on hand, here is a list of chicken broth substitutes that you can use. And most likely, you already have these ingredients at home. While these substitutes won't have exactly the same flavor as chicken broth, they can add similar depth and flavor to meet your cooking needs. And if you are vegetarian or solely on a plant-based diet, there are still better options for you than plain water.

What Is Chicken Broth

Chicken broth is made with chicken meat and bones and then simmered. It got a light chicken flavor and is rich in essential fatty acids and minerals. It is the perfect ingredient to thin out your soup, stew, or sauce while adding flavor.

But what are the differences between them? While "broth" and "stock" are often used interchangeably, there is a difference in how they are made. Chicken stock is made from bony parts and tends to have a fuller mouthfeel and richer flavor from the gelatin. Unlike chicken broth, chicken stock is simmered for hours to make.

On the other hand, chicken broth is made from simmering meat with optional vegetables like celery, carrots, and spices. It tends to be thinner and can be more flavorful than stock. Homemade chicken broth is easy to make, and you only need a handful of ingredients. If you have some time to spare, whip up some homemade chicken broth. You can cook it on the stove, in a slow cooker, or in an Instant Pot.

Other Types of Broths And Stocks (Beef, Vegetables)

If you take the broth and cook all the liquid out of it, what you're left with is bouillon. It's sold in both cubed and powdered forms, bouillon can be dissolved in boiling water to create a broth. Bouillon cubes tend to be high in sodium, so you may not need to add additional salt to your dish. Remember to be mindful when using this ingredient as a chicken broth substitute. They're great in a pinch. But if you see yourself using bouillon often, it would be better to make your own. It's an incredibly easy process, although long. Simply fill a pot with chicken meat and bones, a variety of vegetables, a splash of apple cider vinegar, and a single shake of salt. Cover everything with water, then cook at a simmer until all the liquid is gone.

Use a dry, white wine for a meat-free chicken broth substitute. While you can use it in recipes, chicken broth has a natural fat content that affects cooking and flavor. To add this richness and flavor to the wine, combine it with a tablespoon of olive oil or melted butter. Keep in mind that the wine will retain its alcohol content unless it is brought to a boil. For this reason, wine should be avoided for soups and sauces unless you intend to bring it up above a simmer during cooking.

Water infused with herbs can work as a chicken broth substitute in a pinch. Dry herbs will be what you need, as the flavor is more concentrated in them. Good herbs to combine would be basil, oregano, tarragon, thyme, rosemary, bay leaves, sage, and other seasonings. You may want to add a few seasonings to give a little extra flavor. You can truly customize the flavor profile to the dish you'll be using the broth substitute! Place your dried herb ingredients in boiling water and let them simmer for 10 minutes or so. Set a timer - some of the herb ingredients, such as oregano, will turn the broth bitter if steeped for too long. Have more fresh herbs on hand than dried? You can infuse your water the same way by adding three times more fresh herbs to the water than you would with dried herbs.

Dashi is a steeping stock used commonly in Asian cuisine, and it is a classic mixture used in Japanese cuisine. It is made similar to the chicken and beef broths, but it leans on seafood instead. Kombu seaweed and fermented fish peelings are used to make dashi, and it has a rich, exotic, umami flavor profile that can really kick your dish up a notch. Like traditional broths, it's available in both liquid and bouillon form. The amount of powdered dashi that you add to water will either make it the star or sidekick of your cooking. Keep in mind that dashi can be pretty salty, so you may not need to add additional salt when using this ingredient as a substitute!

While vegetable broth is a great substitute for chicken broth on its own, it does lack the savory richness and umami flavor that the meat broths bring to the table. To amp up your vegetable broth, combine a tablespoon of miso paste with a splash of soy sauce with a cup of vegetable broth. If the vegetable broth is not available, miso paste with a splash of soy sauce or coconut aminos with water will still taste as good. Miso paste is made from fermented soybeans that are mixed with salt, various grains, and koji, and then further fermented. Not only will miso paste add a beautifully rich umami flavor, but it is also healthy for you! Being a fermented seasoning, miso paste is full of the probiotics needed to boost your immunity and nurture a healthy gut flora.

Aquafaba is the proper name for the liquid you drain out of a can of beans or chickpeas. Most of us just pour that thick liquid down the drain, but vegans have turned to it as a starchy protein that can be whipped up like egg whites or serve as a raising agent in baked goods. Left unwhipped, it is rich and flavorful. Just the qualities we're looking for in a chicken broth substitute! Because it is so viscous, you'll need to dilute the aquafaba with equal parts of water.