The Best Nutmeg Substitute For Sweet And Savory Dishes 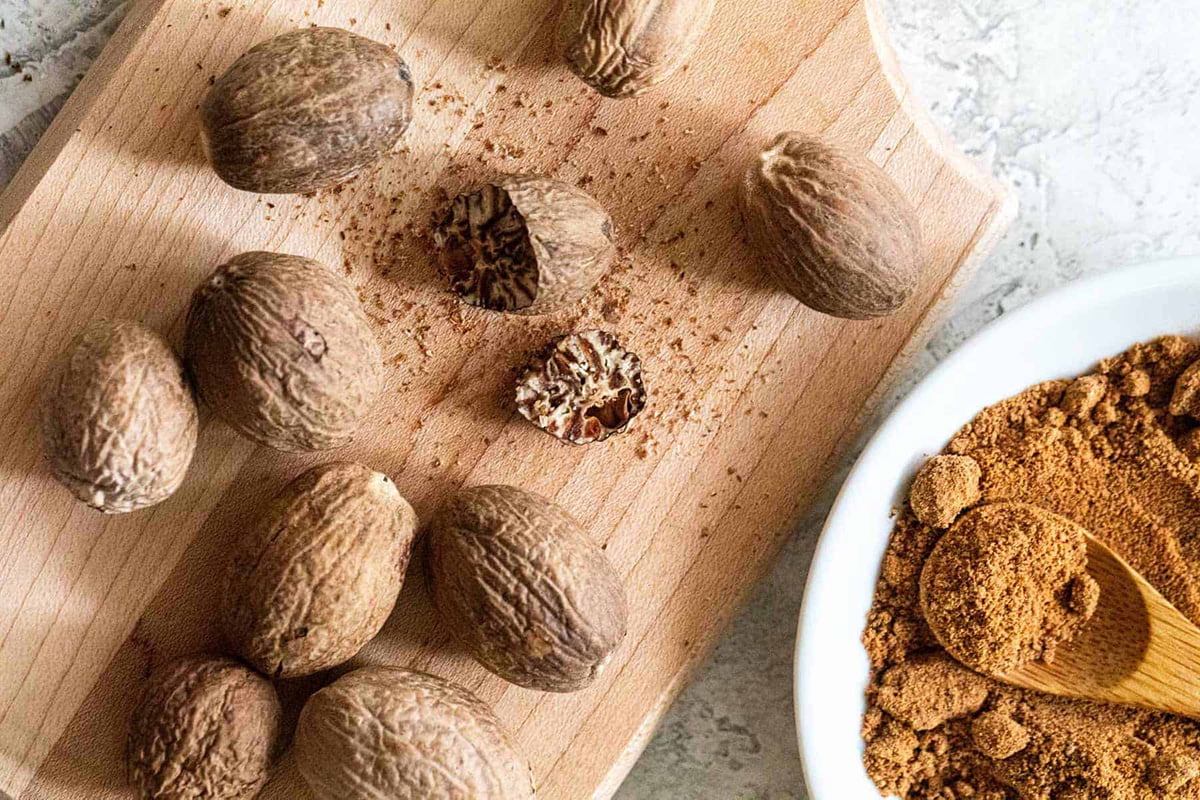 While you probably have plenty of nutmeg around during the holiday season, you may not always have it on hand during other times of the year. Thankfully, a handful of other spices and spice blends can be used to replace nutmeg in your favorite baked goods and savory recipes.

To help you nail your next recipe, we're highlighting the best nutmeg substitutes, along with some useful information about the popular spice.

What is nutmeg, and how is it used?

Nutmeg is a fragrant spice made from the seed of the nutmeg tree (Myristica fragrans), an evergreen tree native to Indonesia. The tree is actually the source of not one but two spices: nutmeg and mace. While nutmeg is found in the inner seed of the tree, mace is found in the red, lacy substance that covers the nutmeg seed. Though sourced from the same trees, the two are rarely used together in recipes.

Thanks to its versatility, nutmeg is one of the most popular spices in the world. While its sweet flavor and warm, nutty aroma are most commonly associated with autumnal and Christmastime treats, they can be utilized year-round for both sweet and savory dishes. It's used to deepen the flavors of everything from beverages like eggnog, chai lattes, and mulled wine to baked goods like cakes, cookies, and pies to scrumptious dishes like soups, cheesy casseroles, vegetable gratins, and roasted meat.

Nutmeg is an intense spice with a nutty, slightly sweet flavor and a warm, pungent aroma. While subtler than other baking spices like cinnamon and ginger, it still adds heat and depth to your cooking.

Nutmeg can be found in most grocery stores in both whole and ground forms. The whole nutmeg looks like a small pit, such as that of a plum or apricot, and is typically sold in packs of six to eight seeds. To use the whole nutmeg, simply grate the seeds using a microplane grater, zester, or spice grinder. While ground nutmeg is certainly easier to use and more convenient, whole nutmeg seeds provide a fresher, full-bodied flavor and a longer shelf life.

Not only does nutmeg smell and taste delicious, but it also offers a number of health benefits as well. Here are a few ways nutmeg may help to prevent disease and improve your overall health:

Pumpkin pie spice is a popular fall spice blend used to flavor pies, cookies, bread, lattes, and other delicious autumnal treats. It makes a great substitute for nutmeg because it contains actual nutmeg. While the exact mix varies in different products, most contain a blend of cinnamon, ginger, allspice, nutmeg, and cloves. When substituting pumpkin pie spice for nutmeg, you can use a 1 to 1 ratio, though you may need to adjust other spices to achieve the perfect balance of flavors.

Apple pie spice is similar to pumpkin pie spice in that it features a blend of fall-friendly spices like nutmeg, cinnamon, allspice, ginger, with the unique addition of cardamom. Its warm flavor makes it a good nutmeg substitute for drinks, desserts, cookies, and other holiday recipes. Because of its flavorful components, it's best to stick to small amounts to avoid possibly overpowering the other flavors in the dish. Start with half the amount of nutmeg and taste test before adding more.

Because mace comes from the same Myristica Fragrans tree as nutmeg, it makes for an obvious nutmeg substitute. Compared to nutmeg, mace offers a more spicy flavor with notes of pepper and cinnamon. When using the spice as a nutmeg replacement, use an equal amount of mace as the recipe calls for nutmeg.

Cinnamon is undoubtedly one of the most popular ingredients for baking and is a pantry staple in most kitchens. Thanks to its strong, spicy flavor and pungent aroma, cinnamon acts as a perfect substitute for nutmeg. When using ground cinnamon as a nutmeg substitute, start with half the amount of ground nutmeg called for in the recipe.

While ginger is spicier than nutmeg, it offers one of the best substitutes for nutmeg in savory cooking. It's commonly used in Indian, Thai, and Asian cuisines to flavor curries, stir-fries, meats, vegetables, teas, and countless other tasty recipes. When using the spice as a nutmeg substitute, stick to ground ginger instead of using a freshly grated root, which is far stronger and can easily overpower a dish. For most recipes, you can use a 1 to 1 ratio of ginger to nutmeg.

While it's easy to assume that allspice is created from a blend of spices, it's actually made from one ingredient: ground allspice berries. The versatile spice gets its name from its all-encompassing flavor, which tastes like a peppery combination of cinnamon, cloves, and nutmeg. When using allspice as a nutmeg substitute, use the same amount of allspice as the recipe calls for ground nutmeg.