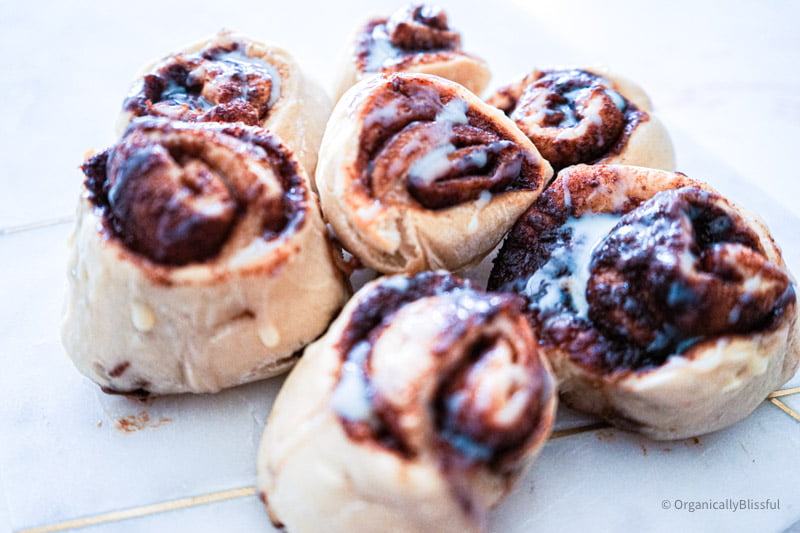 I love pizza night that is made entirely from scratch (yes, including the dough). I can make delicious pizza and dessert all with the same dough, so it is the perfect item for creating a two-course meal. This idea is ideal for a busy mom or looking to impress your guest but have time restrictions. There are few desserts you can make with pizza dough. This time, I made pizza dough cinnamon rolls.

Whether you have leftover pizza dough sitting in your fridge from the day before or simply having fresh leftover from pizza night, pizza dough cinnamon rolls are the perfect dessert to end your meal. It is fluffy, sticky, and just gooey goodness that you can't resist. It is also the easiest cinnamon rolls recipe you can make.

My pizza dough cinnamon rolls are vegan friendly, so this recipe is perfect for anyone who has diet restriction or has a vegan family member. That is if you are willing to share. And if you don't have a pizza dough recipe, check out the recipe I use.

1. Lightly flour the surfer of your working area. Then gently roll the dough into a large rectangle.

2. Drizzle the avocado oil and vanilla extract on top and then smear the entire surface.

3. In a small mixing bowl, mix the sugar and cinnamon together. Then sprinkle on top and make sure you sprinkle evenly.

4. Roll it tightly the long way and roll it into a large log.

5. Use a knife to score the log into three-quarter parts and then score each of those into three quarters. So you should now have nine sections. Each section should be about 2" thick. Use a string of floss and cut along the scoreline. If you don't have floss on hand, use your knife and cut through. 8. While your cinnamon rolls are baking, in a medium-size bowl, mix your icing ingredients together. Stir until a smooth and drizzle-able sauce is formed, and there are no lumps. Recommend that you add the sugar in slowly.

9. Once your cinnamon rolls are baked, let it cool down and then smear your icing. Let it sit at room temperature for about 15 minutes so the glaze can dry. Can I use dough from the night before to make these cinnamon rolls?

Why are my cinnamon rolls tough?

If you cinnamon buns result in dry and crumbly, you used too much flour in your dough. Ideally, it should be tacky to touch, but not so sticky.

What is the healthiest sugar to use?

Coconut sugar is a healthy sugar alternative. It is derived from coconut palm trees that are more nutritious and lower on the glycemic index than regular sugar. Traditionally, cinnamon rolls are made with powdered sugar. You can substitute it with granulated coconut sugar or grind your coconut sugar in a blender and grind into powdered sugar texture.

What is the difference between Cinnamon Roll Dough vs. Pizza crust dough?

Traditional cinnamon roll dough is made with milk, eggs, butter, and vanilla extract. It contains more sugar than pizza crust dough, so it is much sweeter.

How To Make Healthier Cinnamon Rolls

To make healthier cinnamon rolls, here are some swaps you can do:

What else can be made from pizza dough?