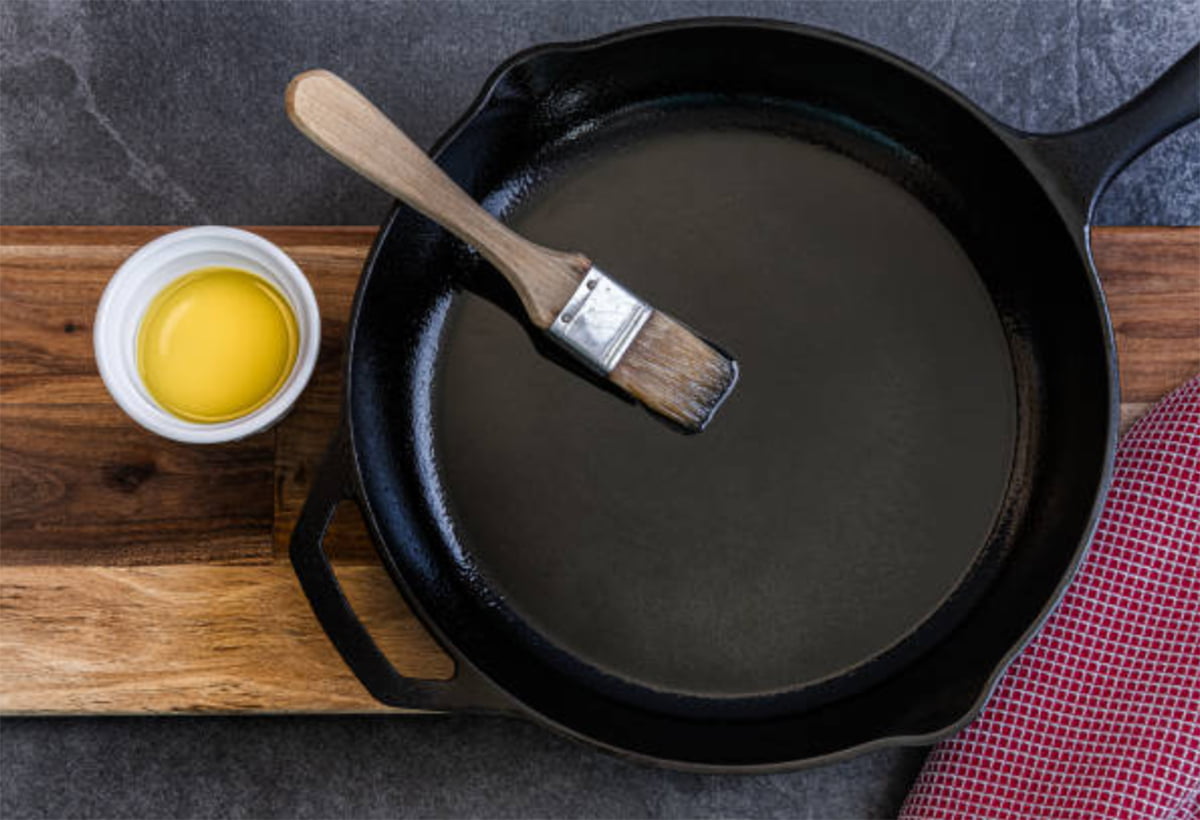 Cast iron skillets are one of the best cooking tools you can have in the kitchen. They'll last for generations, they retain heat exceptionally well, they're inexpensive, you don't have to worry about chemicals leaching from non-stick coatings, and they'll even slightly raise the iron content of your food, increasing their nutrition! But, they are sadly avoided by so many people because they are downright frustrating - unless they've been seasoned well!

Before we get into the individual oils, let's talk about why you need to season cast iron. Cast iron cookware does not have a non-stick surface at all, and you need to create a non-stick surface by seasoning it, especially for a new cast-iron skillet. To do so, you use a process called polymerization. This essentially cooks a thin layer of cooking oil into the pores of the iron, binding them together. You need high temperatures for a prolonged period of polymerization, so you need to use an oil with a high smoke point.

Seasoning creates a strong, non-stick coating to keep your food from sticking. It also allows you to use less cooking fats and oils, making your meals lower in calories. And finally, since the seasoning absorbs into the pans and imparts a hint of flavor to your food, a well-seasoned pan will help your meals taste better!

After you have seasoned a cast iron pan, you may need to re-season your cast iron pan again down the road from cooking, cleaning with dish soap, and normal wear off.

The smoke point is when the oil starts to break down and will start to create smoke. Using a high smoke point oil is important as the most effective temperature to season a cast iron is between 400-500 degrees. If the temperature doesn't reach a smoke point, the fat will break down, and you won't get a polymerization.

Unsaturated fats polymerize better than saturated fat and produce a better coating on your cast iron. This type of fat can easily form a bond to the metal in cast iron that saturated fat cannot do.

Whatever oil you use to season cast iron skillets will add flavor to whatever you are cooking, so it's best to look for a neutral flavor oil as it is more versatile.

Many oils on the market are refined and highly processed, making them less nutritional, more heat-stable, and less expensive, but they can harm your health long term. When seasoning your cast iron, it's best to season it with health oil that's good for you. Look for oils that are organic, non-GMO, unrefined, cold-pressed, raw, and extra virgin when possible.

This factor, however, will also affect the smoking point of the oil. Some natural, unprocessed oil typically have lower smoking points than refined, highly processed oil, and some may have a much lower smoke point. This makes them a healthier oil, not always the ideal candidate for use as a cast-iron seasoning oil.

Now, you can season cast iron at 300-350 degrees if you use healthier oil options. You will need to place it in the oven for one to two hours instead of 30 minutes at 400 degrees.

Let's determine which oil you should use for cast iron cooking.

Avocado oil will give you perhaps the toughest coat of seasoning and the best non-stick qualities possible. A thin coat of avocado oil on your cast iron skillet will make cooking with your pan absolutely enjoyable. It has high unsaturated fats, which help the oil polymer and oxidize well. It has an incredibly high smoke point of 520°F (refined). However, it is by far the most expensive seasoning oil on this list.

Some users swear by peanut oil to season a cast-iron skillet. It certainly does have one of the highest smoke points of any oil at 450°F (refined). It's relatively inexpensive and makes a nice, hard surface. However, it has a strong smell, flavor of peanuts, and it's not allergen friendly. If you intend to use your cast iron pan for mostly stir-fry and Asian cooking, peanut oil would be a good choice to season your cast iron with!

Let's follow up the best seasoning oil with the worst. Olive oil is an incredibly healthy oil, but it is meant to be enjoyed uncooked or in low-heat cooking. At too high of temperatures, it's actually harmful to your body. Olive oil's smoke point is exceptionally low, so it may not be the best to season cast iron skillets. You can use it to season cast iron if you don't take the temperature above 350°F, but you typically need a temperature of at least 450°F to season. Seasoning with olive oil will require multiple seasoning sessions, and you will likely be left with an uneven result.

Crisco is a genetically modified oil made of mostly saturated fats and trans fat. Crisco had its heyday, but as more information is learned about Crisco, many are opting to use natural animal fats instead.

If you'd rather use fat than oil to season your cast iron pan, look into goose fat, deer fat, or bacon grease. While animal fat will give you slipshod results, multiple layers of lard will provide you with a shiny and smooth surface that can hardly be competed with, a very moderate smoking point of about 375°F. Animal fat also contains high levels of saturated fat that do not create optimal conditions for seasoning.

Coconut oil has enjoyed superstar status in recent years. While the health benefits of coconut oil are substantial, and it will lend a delicious flavor to your food, it's not the best oil to season cast iron cookware with because of its saturated fat content. High saturated fat lowers the polymerization required in the seasoning process - meaning that the seasoning won't harden well. And while refined coconut oil has a very high smoke point of 450°F, the virgin coconut oil you likely have on hand has a low smoke point of 350°F.

Canola oil is recommended by many as one of the best soil for seasoning cast iron pans, and you won't find a much cheaper oil than this oil. It will get the job done in a pinch, although you will get a better result if you can source a better oil. You will need to layer multiple seasoning layers, as the first seasoning will be weak and bumpy. It breaks down more quickly than other cast iron seasoning oils, even after multiple seasonings. Still, with its low price, neutral flavor, and decently high smoke point, it's absolutely usable for seasoning your cast iron.

Vegetable oils are very similar to canola oil, and the two are interchangeable. Vegetable oil (refined) has a relatively high smoke point of 400-450F, and it has a light taste, so it won't add flavor to anything you cook. The unrefined vegetable smoke point is unknown.

Vegetable oil has been considered unhealthy by many health-conscious individuals. The health effect will vary depending on what plants they are extracted from and how they are processed. Vegetable oils are typically refined and extracted using chemical solvents or an oil mill.

While some would say, soybean oil is one of the best oil to season cast iron skillets as it has high smoking of 450 degrees Fahrenheit (refined). Soybean oils on the market are typically highly refined. According to a new study, soybean oil not only leads to obesity and diabetes but could also affect neurological conditions like autism, Alzheimer's disease, anxiety, and depression.

Grapeseed oil is a much more affordable option, and it has a neutral flavor, which some cooks prefer. Its smoke point sits at 420°F (refined) so that it can withstand most polymerization methods. However, unrefined grapeseed oil temperature is unknown, and it will be much less than refined.

While ghee butter isn't an oil, it can be one of the best ingredients to season cast iron skillets. If you have never heard of ghee before, ghee is a type of clarified butter. It contains more fat as water and milk solids have been removed, and it is packed in nutrients with high saturated fat. With a high smoking point of 480F, ghee butter can be a great candidate to season cast iron.