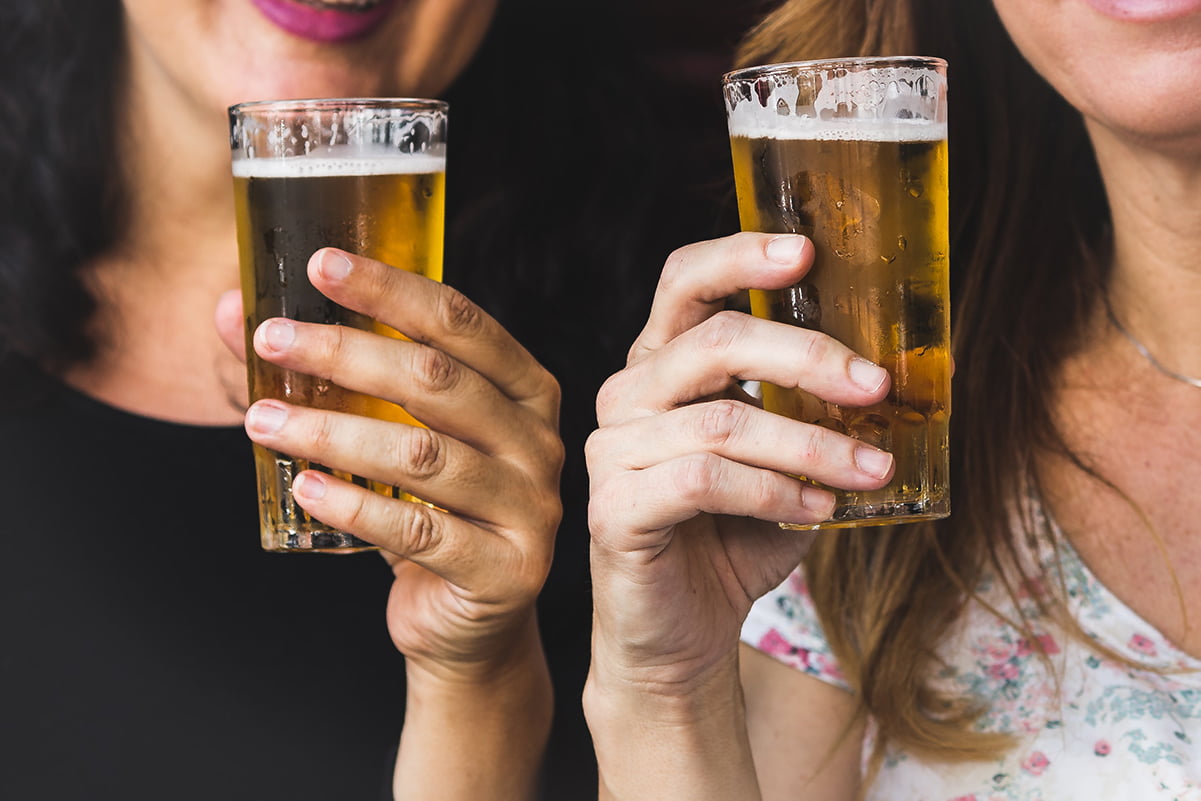 Gluten-free beer has come a long way in the past few years. While giving up gluten used to mean giving up flavorful craft beers, several breweries are changing the status quo. With a combination of innovative ingredients, modern techniques, and time-tested brewing methods, their gluten-free beers taste just as delicious as their gluten-containing counterparts.

To help you find the perfect gluten-free beer for your next socially-distanced backyard barbeque, happy hour, or hangout, I have rounded up the best gluten-free beers on the market in 2021. Whether you're looking for a crisp lager, dark IPA, or refreshing ale, there's sure to be a gluten-free beer that successfully satisfies your taste buds without giving you a stomach ache.

It's important to note that the beers' gluten content below varies, as I have included both dedicated gluten-free, gluten-free, and gluten-reduced beers on the list. While some are crafted in entirely gluten-free facilities, others are "crafted to remove gluten," making them 'gluten-reduced' by FDA standards instead of gluten-free. Please consider your personal gluten sensitivity when selecting your next beer.

Dedicated gluten-free beer: This beer was crafted in entirely gluten-free facilities. Meaning, brewers never allowed gluten ever to enter the facility. This is the safest option for people with Celiac Disease.

Gluten-Free Beer: Brews with gluten-free ingredients, and it safe for people with Celiac Disease.

Gluten Reduced Beer: Brews with gluten, but brewers use enzymes to reduce gluten content. So this means these beers will have a trace of gluten and be labeled as gluten-reduced on the beer bottles. This option is not safe for people with Celiacs.

The 10 Best Gluten-Free Beers That Actually Taste Like Beer

The Omission series— brewed by Widmer Brothers Brewing in Portland, Oregon— produces some of the tastiest gluten-free beers on the market. The brewery developed a unique proprietary process to remove gluten after the brewing process is complete. Unlike bland gluten-free beers that are brewed without gluten, Omission's beers are fermented from grains containing gluten, allowing them to develop an authentic beer taste.

Brewed in the traditional style, Omission Lager is the perfect gluten-free beer choice for occasional beer drinkers and beer buffs alike. It's as crisp and refreshing as any conventional lager. The award-winning lager is brewed with Cascade and Millenium hops result in a bright, aromatic hop profile and light flavor.

Each batch of Omission's award-winning beers is tested for gluten content by an independent lab to ensure they meet Omisson's strict standards. Widmer Brothers Brewing even offers a feature on the Omission website where you can look up the test results of the batch you've purchased. So kick your feet up, crack open a cold one, and sip comfortably, knowing your gluten-free beer is truly gluten-free.

Omission Pale Ale is an easy-drinking ale that tastes and smells just like its gluten-containing counterparts. It's brewed to showcase the Cascade hops flavor, resulting in a full-bodied craft beer with a caramel malt body and sweet floral aroma. At 5.8% ABV, this pale ale is the seven-time award-winning American ale that is perfect for backyard barbeques and summertime sipping.

Stone Brewing Co. considers IPAs their "bread and butter," so it's little surprise their gluten-reduced Stone IPA is one of the best on the market. It's fermented using a method that breaks down and removes the gluten, resulting in levels low enough (less than twenty parts per million) that gluten-sensitive individuals can enjoy the flavorful IPA.

Their Stone Delicious IPA packs a hefty punch with a flavorful blend of Lemon Drop and El Dorado hops. It's bright, and the citrus-forward flavor balances by a heavy dose of hops, lightly-toasted malt, and a touch of spice. With a medium body, deep golden color, and 7.7%

ABV, it's the perfect choice for a beer connoisseur looking for something a bit bolder. But remember, this beer is gluten-reduced, so it's not safe for people with Celiac Disease.

If you're looking for a brewery that's 100% gluten-free, look no further than Glutenberg. Their tasty beers are crafted using strictly gluten-free ingredients and a unique brewing method that creates their bold flavors and refreshing brews. Glutenberg uses grains like millet, buckwheat, corn, quinoa, and amaranth in their gluten-free beers instead of wheat.

For a celiac take on a classic, try Gutenberg's Stout. The robust stout has a dark malt and rich flavor that would fool any stout lover. It's brewed with cocoa nibs and coffee to create a chocolatey scent, deep color, and espresso flavor notes, and ripe fruit. If dark beer isn't your thing, Glutenberg offers various ales, lagers, and other gluten-free beers that you're sure to love.

Gluten-free beer that is crafted in Quebec microbrewery and is available in the U.S. This beer is made with naturally gluten-free grains such as quinoa, millet, buckwheat, corn, and amaranth.

This refreshing beer has a 4.5 percent ABV with a dry and citrusy taste with a floral note. A little bitter with a subtle sweet taste makes it easy to drink pale blonde color beer that pairs well with various dishes and cuisine.

Another tasty beer from Glutenberg and it is one of its flagships. Made with buckwheat, millet, quinoa, and amaranth offers a grainy profile while providing a steady mouthfeel. The soft and refreshing beverage gives hints of coriander and curacao. It is 5% ABV and only 13 IBU. This is a great smooth, light ale that has enough character and texture to quench your thirst.

Milwaukee-based Lakefront Brewery has been crafting innovative beers since 1987. The brewery is also a Certified B Corporation— one of less than 25 in the world— and uses sustainable brewing practices to ensure they are both enjoyable and environmentally-friendly.

Lakefront Brewery's New Grist is a pilsner-style beer that is gluten-free and can be enjoyed any time of year. It's brewed with rice and sorghum instead of wheat or barley and is certified gluten-free, making it a suitable choice for those with celiac. The crisp pilsner is a brew with Zeus and Willamette hops for a refreshing flavor, light body, and classic pale gold color.

Two Brothers Brewing has been crafting their gluten-free Prairie Path Golden Ale for decades. The family-owned artisan brewery is based in Chicago, where they use sustainable practices, high-quality ingredients, and time-honored traditions when creating their tasty brews.

What Prairie Path lacks in gluten, it makes up for in complex flavors, beautiful pale gold color, and citrusy aroma. At 5.1% ABV, it's the perfect brew to sip alongside dinner. The golden ale features a light, fruity, and slightly sweet flavor with a creamy finish that lingers just long enough to leave you craving another sip.

Crafted in Colorado, Holidaily Brewing Co. is the first state's 100% gluten-free brewery. It is also the largest brewery in the U.S. Dedicated to gluten-free beers. One of the best gluten-free beer brands worthy of checking out, especially if you worry about cross-contamination of gluten.

This amber ale comes in a beautiful color that is reminiscent of a mountain sunset color. This 5.2% ABV Holidaily Brewing co Beulah Red Ale is gluten-free and offers toasted malt characteristics with a caramel note and a subtle floral hop aroma.

Rustic Badger is Alt Brew's flagship beer. It is brewed with Belgian yeast and two varieties of hops for a refreshing and slightly bitter beer with a crisp apple note.

What are the benefits of gluten-free or gluten-reduced beer?

Beer lovers who don't have celiac disease or have gluten sensitivity can also benefit from drinking beer that is gluten-free or gluten-reduced. Traditional beer is heavy in carbohydrates (particularly barley and wheat), which can cause bloating or other digestive stress for some. On the other hand, gluten-free beers are lighter and easier to digest while taste like traditional beer.

What is gluten-free beer made of?

These beers are usually brewed with a combination of millet, buckwheat, quinoa, corn, and amaranth.

With modern innovation and technology, these beers taste very similar to the real deal. Some may say it is different if you are used to drinking the traditional stuff. But not in a bad way per se. They are typically a little lighter since they are not brewed with barley and wheat.

How to Cut Dragon Fruit | Prepare And Serve Guide